KEVIN O'GRADY GLASS ARTIST
california mission series
I have been working hard on a  project that will take years to complete.
Over these last few years I have fallen in love with the California Missions while on vacation throughout the state. Linda and I have made it our personal mission to visit all 21 of them and learn as much as possible about their history.
I wanted to find a way to merge my love of glass and my new found interest in these Spanish missions and what began to emerge is this monumental project. I have always been driven to create murrini canes (pictures in glass) in a medium that makes it very challenging. I am the pioneer of creating canes in borosilicate and have constantly strived to improve and expand my skill in the way I build and use the murrini. I currently use murrine cane in my bracelets, marbles, and pendants. My Flower Garden cuff bracelets and the Flower Grotto Vortex marbles feature various flower murrini. The Tide Pool bracelets and Vortex marbles also have murrine cane inside. And of course, all my pieces are signed and dated with my exclusive signature cane.
My goal is to complete, in glass murrini, all 21 California Missions, a portrait of Father Serra (the Franciscan priest that founded the missions all along the California coast), and the iconic Camino Real Bell that marks the trail between missions and can be seen every few miles along highways in California. 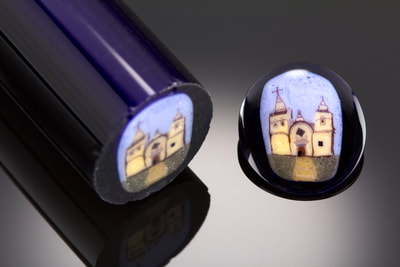 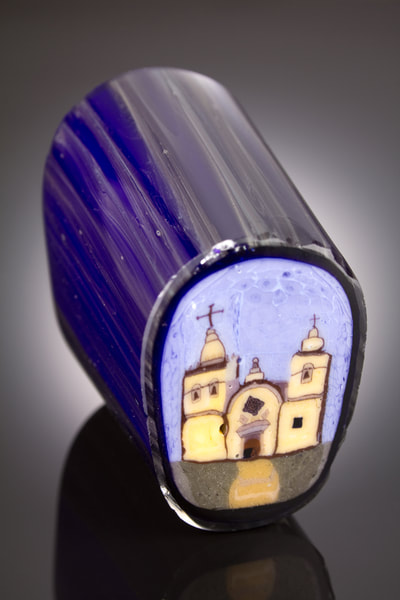 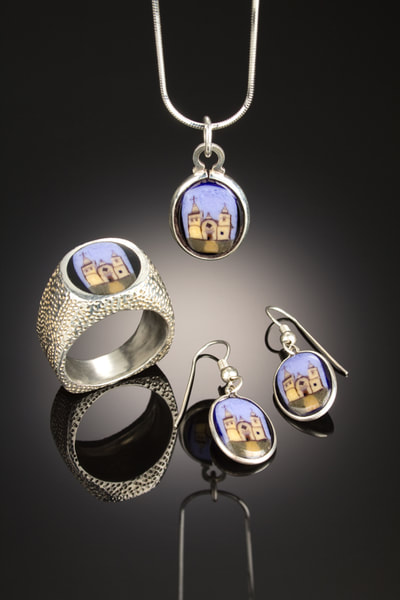 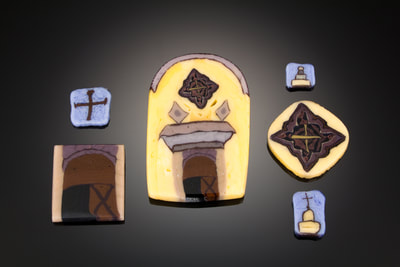 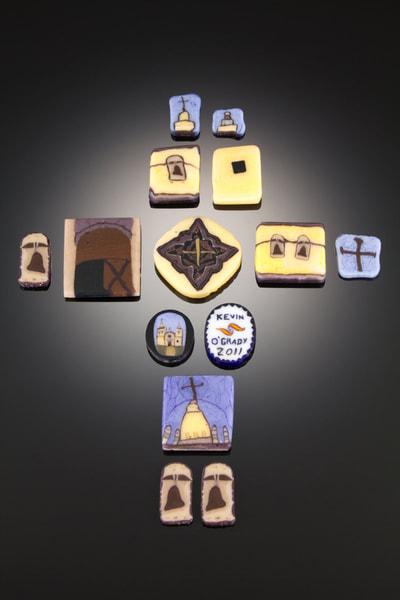 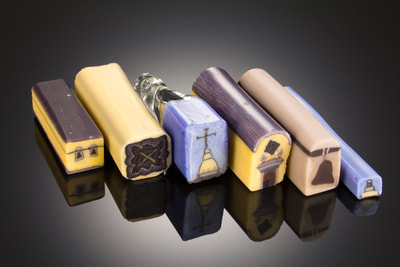 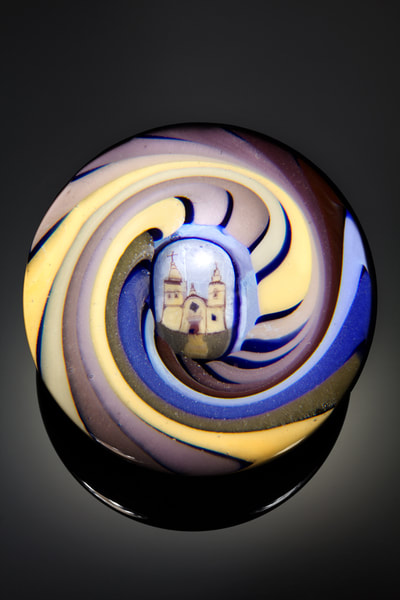 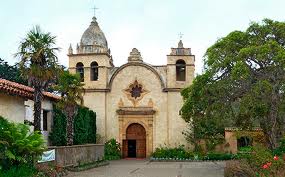 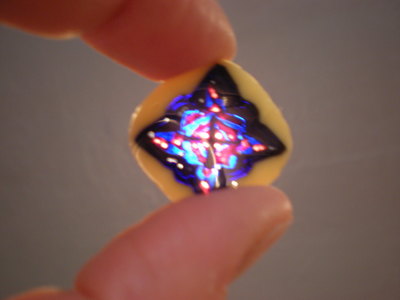 The Carmel Mission was Father Serra’s favorite, and he is buried under the altar in this beautiful church.  Carmel was founded in 1770, the 2nd of the missions.  The mission was originally located near the presidio of Monterey, but in 1771 Father Serra moved it 5 miles south near the mouth of the Carmel River.  Monterey became the capital of early California, and Carmel became the headquarters of the missions.  The stone church was abandoned in 1836 after secularization.  By 1880 the roof of the church had collapsed.  A new roof was built in 1882, and further restoration took place in 1924.  The mission became a parish church in 1933, and the church and its grounds have been beautifully maintained ever since.  The Moorish influence of the architecture of the Carmel Mission is unique among the missions.
This is my favorite mission along the Camino Real so I chose it to be the first in my series of Murrine Canes honoring the beauty and peace of the California Missions. 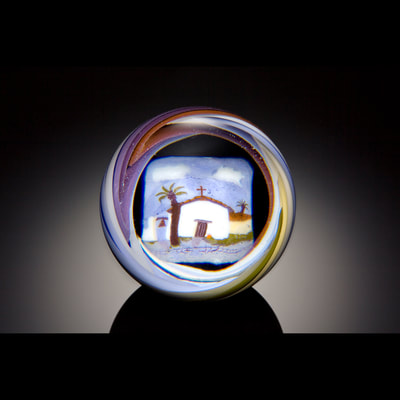 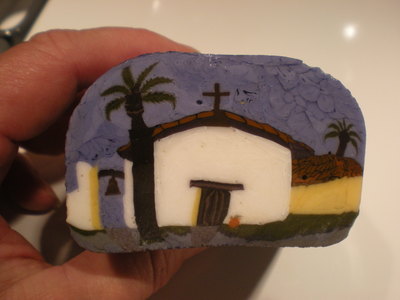 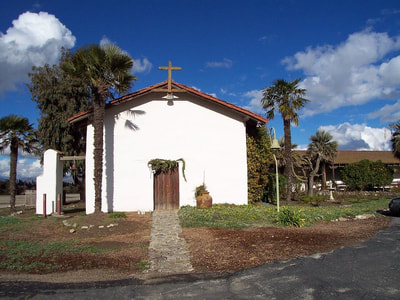 In 1791 Father Lasuen planted the cross and rang the bell heralding the founding of Mission Soledad.  The idyllic yet isolated location has changed little since then, remaining a peaceful outpost to this day.

Gradually this humble mission flourished and became prosperous, although it was never as celebrated and well visited as some of the more accessible coastal missions along the Camino Real.  When the pirate Hippolyte de Bouchard began his raids on the coastal missions in 1818, many clergy and civil governors took refuge in Soledad, the most isolated outpost of the mission chain.

It remains tranquil and lonely and is a vision of peace from the deck of one of my favorite vineyards in that area. 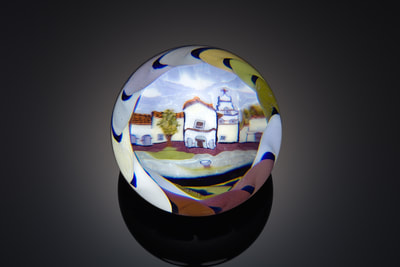 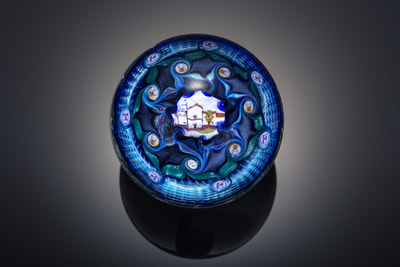 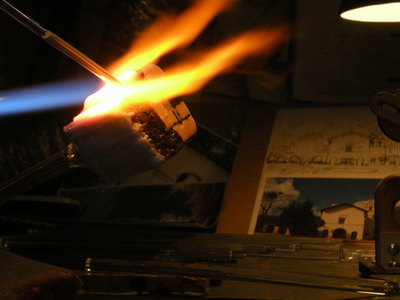 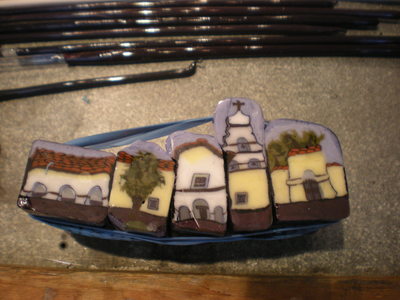 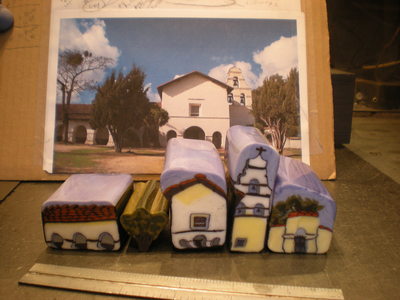 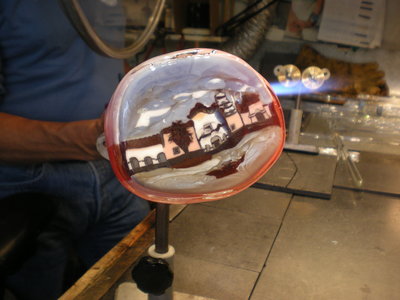 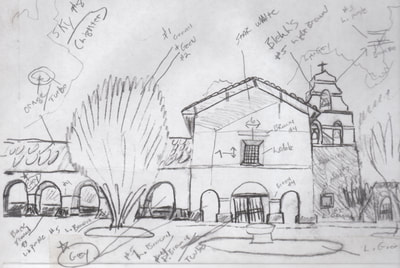 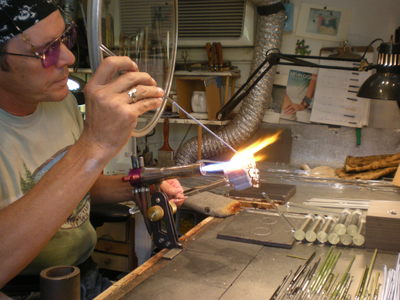 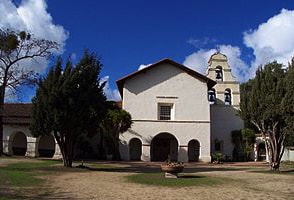 Father Lasuen founded San Juan Bautista, named after Saint John the Baptist, in 1797.  Located adjacent to the San Andreas Fault, it has been damaged by several earthquakes, but never fully destroyed.  It was restored in 1884, 1949, 1976, and again in 2010, when the three bell campanario was fully restored.

San Juan Bautista is also know as the Mission of Music thanks to Father Tapis, who taught singing to the renowned Indian boys choir, joining Father Arroyo de la Cuesta, who was a composer and has handwritten choir books at the Mission Museum.

The beautiful original altar reredos (altar screen) and bultos (saints), painted in 1818, remain largely un-restored.  The Mission also boasts the largest and most complete collection of apostolate paintings in the Mission chain.

A modern side note; the Mission was the setting for Alfred Hitchcock’s 1957 movie, Vertigo.

Mission San Juan Bautista is on the only remaining original Spanish Plaza in California and part of the original Camino Real can be seen from the Mission.
MISSION SAN DIEGO DE'ALCALA 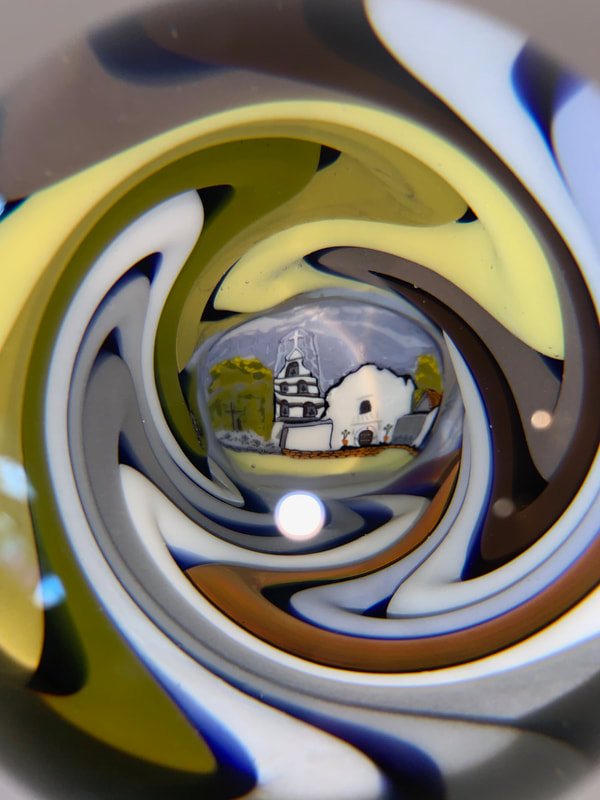 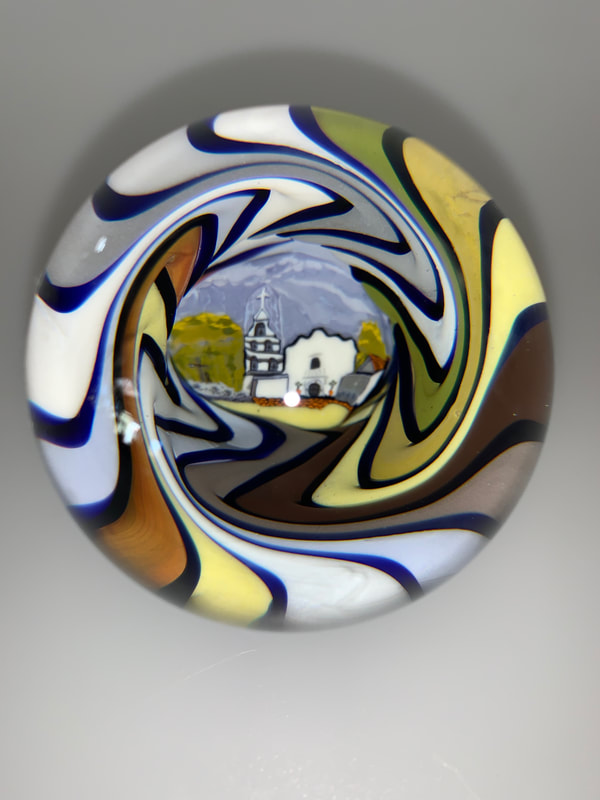 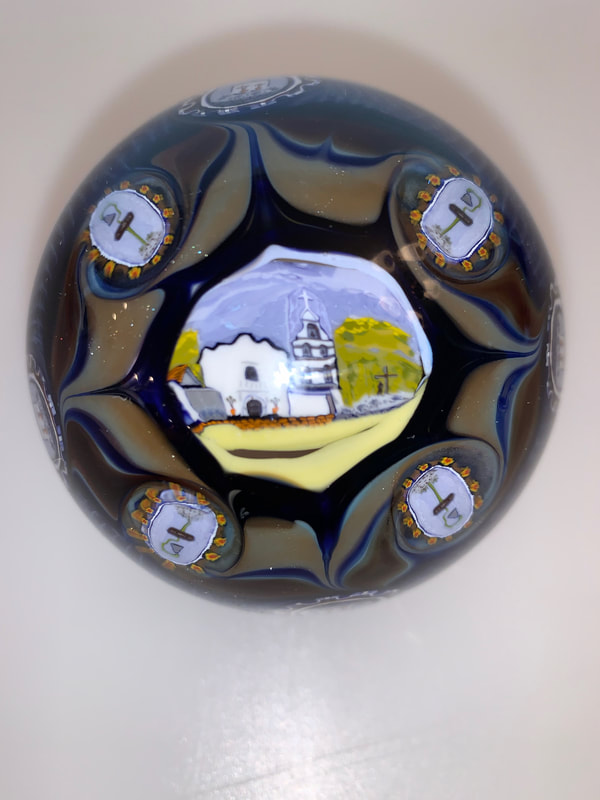 The first of 21 California Missions,  Mission San Diego de Alcala is name after the 15th century saint, Didacus of Alcala, more commonly known as Saint Diego.  It was founded July 16, 1769 by Father Junipero Serra who was known as the Father of California Spanish Missions.  He personally founded 9 of the 21 Missions.

Originally located on a  hill overlooking the bay, a drought in 1774 forced the Mission fathers to move the Mission about 6 miles inland to its present location, closer to the San Diego River.

In 1775 the Mission was attacked by local Tipai Indians who attacked and burned the church down.  The Franciscans then employed master mason Miguel Blanco to design and construct a larger church which was needed for the growing population.  The church features striking windows, built high for protection, and also to prevent them from collapsing under the weight of the adobe walls.  When the roof cracked in 1811, large buttresses were added to the front of the Mission which allowed the building to survive the 1812 earthquake.

The impressive campanario, or bell wall, is 46 feet tall and features 5 bronze bells.  The largest bell weighs 1200 pounds and is named Mater Dolorosa.

The American military occupation of the Mission began in 1846 and lasted 16 years, until President Abraham Lincoln signed a proclamation returning the Mission to the Catholic Church in 1862.

Today, the church serves as a religious center to a large and active parish.
​
COPYRIGHT© 2009-2018.  KEVIN O’GRADY.  ALL RIGHTS RESERVED.